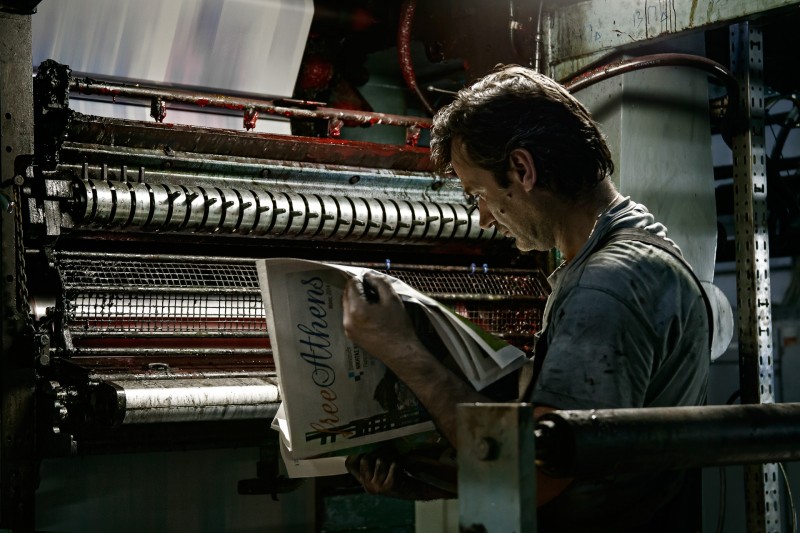 Yiannis Kostavaras photographs from ‘After Hours’ – a co-project with fellow artist Pavlos Tsigas – take us into the night time world of Athens and introduce us to the world of newspaper printers, meat market workers, fishmongers, wholesale flower sellers, taxi drivers, bakers and all those who make their living while the rest of us are asleep or partying. The unseen, the unknown, the people who keep the world ticking, moving 24 hours a day.

The pictures were taken between 12:01am and 5:59am with Kostavara documenting the fatigue, creation and joy of ordinary people struggling to make a few euros in a time of great uncertainty, in a recession that has engulfed the world and in particular Greece – which is set to change the course of European economic history if it votes for Syriza in the forthcoming elections on Sunday -which has been pummelled into the ground by severe austerity measures.

Kostavara is primarily a film and TV commercial editor and he brings this aesthetic to his still photographs, there is a sense of narrative, of being there, caught in the middle of an everyday drama, one that unfolds every night on the streets of Athens. His pictures are a timely reminder that many of the simple things we take for granted are created, made, produced and served by hard labour under the cold night sky. Here’s what he has to say about the series:

We decided to do this project, following from my own visit to the Central meat market in early 2014. It was impressive what happens at 3am at night when most people sleeping or entertaining. People and goods come together, human silhouettes come and go in the twilight, orders written on the go … a working organism. Our primary goal was to praise these people, these nameless heroes. I thank all those who helped to highlight these workers when across the world there is so much suffering. A taxi driver in Maroussi, workers at the newspaper press factory in Koropi, trading in fish markets, butchers at Central Meat Market, bakery in downtown, flowers in Rizoupoli